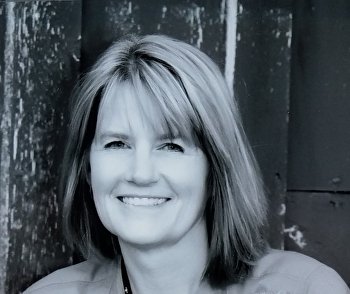 Barbara Ward was born in a small rural town in Southern Alberta Canada.  She spent her youth outdoors where her favorite activities were hiking, skiing, riding her crazy Arabian mare across the prairies, and swimming in the cold glacial Canadian lakes. Although she was passionate about art and drawing from an early age, her life took an interesting detour. Her husband, a UPS driver, was laid up for several months because of knee replacements. Because of this she was recruited as an Art Director in the commercial film world. She began to do architectural  renderings, choose the paint colors, fabric, floor coverings ,  landscaping concepts , signage, faux painting, design work, props, and do the  decorating  and shopping. She was involved with feature films, commercials, industrial films, and episodic television for 29 years. This experience although it took away from her actual time pursuing the miles of canvas an artist is beholden to, gave her an opportunity to develop in color and design principles.  Also what every artist needs to respond to, the ability to produce under deadlines and pressure. After an accident sidelined her film career, she began to seriously   attack the canvas with her brushes.

Although Barbara is mostly  self taught, she has been influenced by several contemporary artists, a few of which are, Kathyrn Stats, Scott Christensen, and Lindsey Bitnar Graham.

Barbara’s medium is oil. Her passion is plein air painting.  Combining her love of the outdoors, the sights, smells, and sounds found there with the challenge of capturing an often fleeting moment of nature is her quest.

Barbara lives in Payson Utah , where she shares her five acre mini ranch with her husband, 4 horses, one over active border collie, Lennie, and a pampered  Westie, Lucie.